Home > About Us > Ministry Team

Simon came to St Albans having been Minister at New Road Baptist Church, in Oxford for 12 years. Simon trained for ministry at Regent’s Park Col 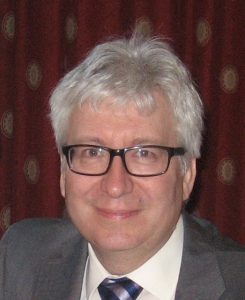 lege, Oxford obtaining an MA in Theology and a Diploma in Pastoral Theology in the process.

He has been a regular broadcaster on BBC Radio Oxford and now on Three Counties Radio where he reviews television and cinema from a Christian perspective. He also writes on these topics for Roots, an ecumenical worship resource, and the Bible Society. You can also hear Simon on Premier Radio.

Simon is interested in most sports and is a faithful supporter of his one time local team Brentford Football Club. He is interested in popular culture, national and international current affairs and believes an interest in the world around us, social, cultural and political, is an important part of ministry and communicating the Gospel.

Before Simon trained for ministry he worked as the sites manager for an architectural metalwork sub-contractor. Before that he obtained his first degree in Physics/Metals and Material Science at Aston University. Simon is married to Catriona and they have three grown-up children and two grandchildren. Simon can be contacted here.